Glute ham raise is an exercise done at the gym, at home, or your friend’s garage gym. The problem is, not everybody has the glute ham raise machine.

Also, not all commercial gyms invest their money in a glute ham raise machine, despite being very important and effective.

If you are interested in the fitness industry and have the goal of building muscle, increasing strength, or increasing endurance, you must have heard about the glute ham raise exercise.

These goals require effective exercises to be done so you can achieve them quickly but effectively.

Some people have the mindset of black and white. In other words, some people say that glute ham raise exercise is the only exercise that will build your muscle in the targeted area, exercise XYZ is the best one, and you should do it.

The problem with this mindset is that every exercise has alternatives that do the same job with the same effectiveness. Let’s say that I will not be able to get a glute ham raise machine.

Now I can’t train legs? This is a black and white mindset. You could train your legs and build them even better than with the glute ham raise machine. 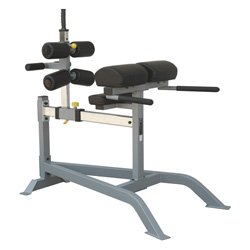 Why is the Glute Ham Raise important?

Glute ham raise is a popular exercise among bodybuilders, powerlifters, and nearly everyone that goes to the gym regularly, and that’s because it is vital.

The glute ham raise targets the hamstrings, glutes, and the entire posterior chain, making it one of the best exercises for that area because it does not isolate just one muscle but targets different muscles simultaneously.

The Glute Ham Raise is Effective For Hypertrophy

As we said, glute ham raise exercise targets the glutes, hamstrings, and the poster chain, making it great for hypertrophy. When mixed with a good training program, it will offer a great stimulus to these targeted muscles, resulting in muscle gain.

For best hypertrophy results, you should aim to do the glute ham raise exercise in the 10-15 rep range under slow and constant tension. It will add enough volume and stimulus to your entire posterior chain, which will increase its muscle size.

Glute ham raise is used as an accessory movement for powerlifters, weightlifters, and even CrossFit players to increase the athlete’s strength.

When used correctly, the glute ham raise increases the posterior chain’s strength. Glutes and hamstrings are essential muscles regarding powerlifting and weightlifting.

Increasing the posterior chain strength is crucial for increasing the squatting, deadlifting, and weightlifting movement’s strength.

If your goal is to increase strength and train the glute ham raise as an accessory movement to your main lifts, focus on doing somewhere between 8-12 reps with a light to moderate load challenging enough to offer stimulus.

The Good Morning exercise is a popular exercise among the bodybuilding and powerlifting community as it is quite effective.

It targets the entire posterior chain along with the hamstrings and glutes. However, it needs to be done properly to prevent any injuries.

The Good Morning exercise is great because it targets the same muscles as the glute ham raise with the same effectiveness. It is good because it offers great mechanical tension, which is the main driver of hypertrophy and strength.

If you loaded the bar more each time you do the good morning exercise, you would witness a great muscle gain in the posterior chain you never saw before.

To do the good morning exercise, you will need a barbell, weight plates, and a squat rack. To start, place the barbell on your rear delts as you would do with a back squat, have your legs wider than your shoulder width a little bit, and unrack the bar.

To start the movement, bend your knees slightly while engaging the core and hinging forward at your hips. Keep hinging forward until your torso is near to parallel, then come back up and repeat. Don’t forget to keep your spine neutral and straight to prevent any injuries.

The Romanian Deadlift is a variation of the conventional regular deadlift that focuses more on the hamstrings and posterior chain. It is used as a main accessory to the deadlift and squat because of its functions and effectiveness.

The Romanian Deadlift exercise is an important exercise for bodybuilders, powerlifters, and weightlifters as it recruits the hamstrings, glutes, and entire posterior chain in a great way.

It serves as an accessory movement for these sports’ main lifts as it increases their related strength and increases the muscles related to them.

It is a great exercise as it enables you to add weight each session for a greater load and intensity and be done with different pieces of equipment, such as the barbell, dumbbell, and kettlebell. But we are going to mention the barbell version in this section.

To do the Romanian deadlift exercise, you need to have a barbell, weight plates, and a power rack. To start, rack a barbell above knee height. Start by gripping the barbell at shoulder width with your feet at hip-width, then unrack the barbell.

Start by hinging down at your hips while keeping a slight bend at your knees. While hinging at your hips, push them back as you lower down the barbell.

Keep lowering until the barbell reaches below the knee height, get back up, and repeat.

Cable Pull Through is an exercise requiring a cable machine, unlike other glute ham, which raises alternatives that often need a barbell or a dumbbell.

It is a great exercise, and it serves as an accessory movement to exercises such as the squat, deadlift, and the clean and jerk.

It stretches the hamstrings muscles to a great degree, especially with the people that have good flexibility.

It is also good because it offers a great stimulus to fatigue ratio, meaning that it gives you enough muscle stimulus with little to no fatigue.

Start by attaching a rope handle to the lowest cable level. Grip the rope in between your legs with your back facing the cable machine, walk away from the cable until you feel enough tension.

Bend your knees slightly while hinging at the hips and pushing them backward, lower yourself until you feel enough stretch in your hamstring, get back up while pushing your hips in, and repeat.

The Nordic Curls is a glute ham raise but without the machine itself. It is a simple exercise that needs nothing but your bodyweight and something or someone to stabilize your legs.

The Nordic Curls is a great exercise because it targets the same muscles, and it is a similar movement to the glute ham raise exercise.

Studies have shown that the nordic curls exercise decreases the hamstrings’ potential risk of injury and increases its strength to a great degree.

If you don’t have any equipment and can’t get access to a barbell or a power rack, the nordic curls will do the job as a glute ham raise alternative.

To start, put a mat under your knees and hook your ankles under something or have a training partner or a family member stabilizing your ankles and preventing them from moving.

Get in a kneeling position, lower your body down while engaging your core and hips. Before landing on the floor, have your hands in front of you, push back to the starting positions, and repeat.

In conclusion, the glute ham raise is a great exercise, but unfortunately, not everybody has the ability to do it.

Some reasons include that their commercial gym does not have it; they didn’t buy it or do not like it.

There are many alternatives to each exercise. We have listed the best alternative exercises similar to the glute ham raise exercise.

That does the same job, increasing the glutes, hamstrings, and the posterior chain’s strength and hypertrophy.

We have listed different exercises needing different types of equipment.

Some exercises can be done with various equipment such as barbells or dumbbells, some need cables and pulley machines, while some could be done with your own bodyweight.

Consider your options and the available equipment at your home or your gym, and you will be ready to perform any glute ham raise alternative exercise.